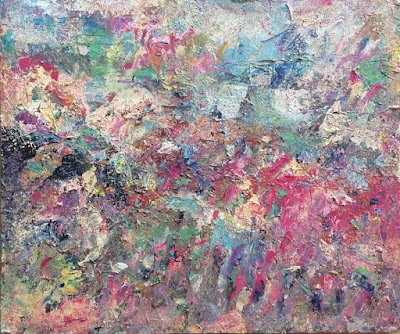 I'm currently in the process of organising an exhibition of visual and sound works that relate to 'landscape', however that may be interpreted, comparing the emphasis on 'material' and 'process' in the making of both kinds of works within the 'No-Audience Underground'.

If I can lay a little context...

I have recently been developing a series of paintings that place emphasis on making explicit the process with which they have been made, declaring their own material properties - the paint is definitely paint; the mixing of colours is evident within the layered, heavily textured surface. Although there is nothing illustrated in a figurative sense, the works seem to relate in some way to 'the landscape'. I don't think is necessarily a subconscious thing. I soak up the, often overwhelming, colours, textures, shapes, forms, smells and sounds of my immediate environment and don't doubt my internal recording of this stimulus manifests itself in the paintings.

I always make these works listening to music, often the work of artists loosely collected under Rob Hayler's 'No-Audience Underground' umbrella. This is music that is rich in material properties - tape hiss, static, tones, drones, clicks, scrapes, feedback. It's often a very tactile sound; a minimal music that doesn't hide, nay accentuates, it's method of construction. The use of field recordings is prevalent too - and particularly interesting when considered in relation to the idea of 'the landscape'. I don't necessarily mean this in an overtly Romantic, pastoral way, as recordings of daily existence, urban banalities, documents of the city, are just as interesting. A Brutalist library is as much a part of the landscape as a withering oak.

Whilst working on the paintings, I began to make comparisons between my work and the music, the tactility, the emphasis on material properties, the assumed environmental influences of... and lo! the idea for an exhibition combining the two was born.

There's a lot of visual work being made within the No-Audience Underground, whether that's conventional art objects or visual works that are given a utilitarian purpose, wrapped lovingly around a cassette, CDR or large slab of plastic. Or, works that exist somewhere in between the two. I feel a platform to collect and present these works, and to make explicit the connection to the music produced within the extended No-Audience community, would be a really interesting thing: Presenting visual works in the gallery space along with various No-Audience sound recordings.

So, I'm putting a call out for interested visual artists and musicians, or sound artists, for lack of a non-icky term, who's work relates in some way to 'LANDSCAPE', however that may be interpreted, and places emphasis on PROCESS and MATERIALS.

The exhibition will be held at South Square Gallery, Thornton, Bradford and will take place March through April 2017.

If you are interested in submitting a proposal of works to be exhibited then please email me at crow_versus_crow (at) hotmail (dot) co (dot) uk, including a brief summary of your work and links to relevant examples of work.
Posted by Crow Versus Crow at 13:17