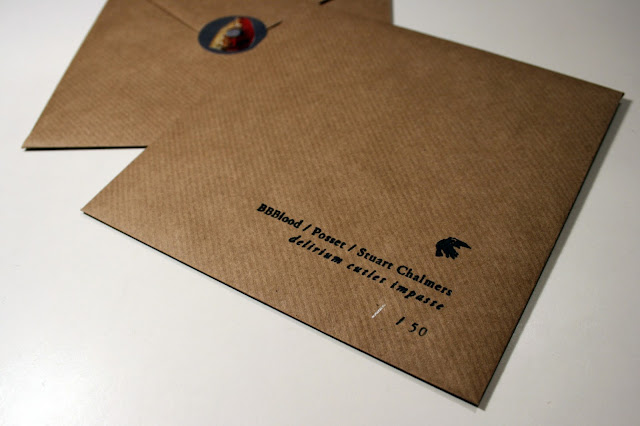 Whether wielding Dictaphone, mobile phone or zither, Posset, BBBlood and Stuart Chalmers, three pillars of the No-Audience Underground, have honed their respective craft over a number of years and an even larger number of innovative and pioneering recordings, released through such esteemed DIY labels as Chocolate Monk, Strange Rules, Singing Knives, Beartown Records, KIKS/Girlfriend, Invisible City, Was Ist Das?... The list goes on!

So, it is an absolute pleasure for Crow Versus Crow to be able to present, Delirium Cutlet Impaste; a three-track three-way split, with BBBlood, Posset and Stuart Chalmers each offering their own slab of rich, evocative, alchemical tape music.

Delirium Cutlet Impaste is a record made from within the socio-political mindfuck that is the UK in 2017.

…The prevalence of so-called ‘alt-right’ (read: fascist) politics; deepening social divisions; an increasingly retrospective, nostalgia-yearning for an England that couldn’t, shouldn’t and, almost certainly, never did exist; a building of cultural walls to the exclusion of various/any cultural others…

This is the climate within which this record has been made.

Yet, this record isn’t a reactionary, condensable to a soundbite, statement piece. It is an open, complex maelstrom of layers of sounds and ideas

…domesticity; poetics in the minutiae of the mundane; field recordings of European excursion; the sounds of various non-Western musics, processed and subsumed; the body as instrument, as conduit…

This record reflects an open-armed engagement with a shifting, tumultuous, uncertain contemporary world. It is a raw, joyful expression of the creative process in, and in spite of, the environment from which it is born.

Delirium Cutlet Impaste will be available from Friday 14th April 2017 as a limited edition of 50 CD-Rs, housed in a full-colour 300gsm ‘greeting card’ sleeve, featuring a collaborative collage produced by BBBlood, Posset, Stuart Chalmers and Crow Versus Crow, in a hand-stamped, numbered and sticker-sealed envelope, and download from the Crow Versus Crow Bandcamp. 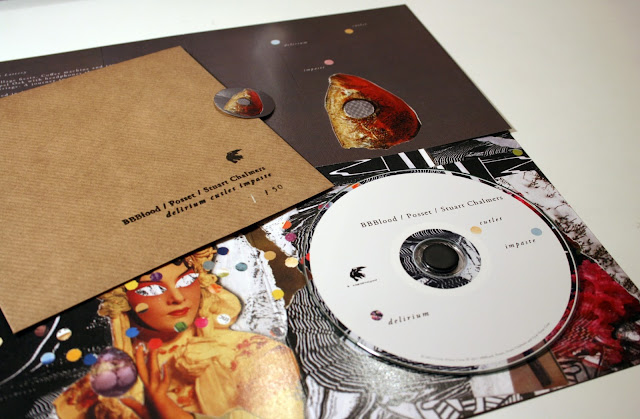