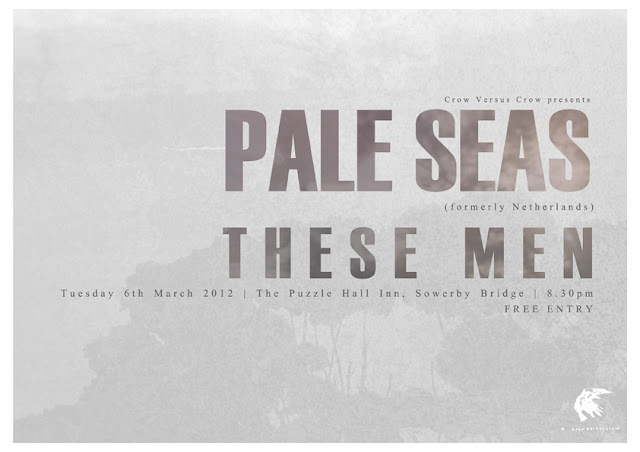 Crow Versus Crow proudly present, for their second night at The Puzzle Hall Inn, PALE SEAS with support from THESE MEN.


PALE SEAS (formerly Netherlands)
Crow Versus Crow have been huge fans of PALE SEAS since hearing an early track, 'Killed By Lions', on Marc Riley's BBC6Music show in early 2011 when they were but one solitary man, Jacob Scott, working under the name Netherlands.
Now expanded to a group, featuring Zeelah Izabella Anstey on vocals and percussion, Matthew Bishop on guitar and keys and Graham Poole on guitar, vocals and keys, PALE SEAS craft timeless organic pop songs that retain the sense of introspective, beaten and broken catharsis that was so prominent within Jacobs initial home recordings.
Serge Gainsbourg, Galaxie 500 and My Bloody Valentine and early Bee Gees in equal parts.

Like a barbershop quintet performing Beach Boys-influenced tales of contemporary, and socially conscious, woe. If we're to be reductive (which we are), for fans of, erm, Barbershop quartets and The Beach Boys(!) The Beta Band, TV on the Radio, Super Furry Animals...


This gig is free entry, although donations are welcome and will go directly to the artists. As always, Crow Versus Crow will not take any profit from this gig.
Posted by Crow Versus Crow at 20:54