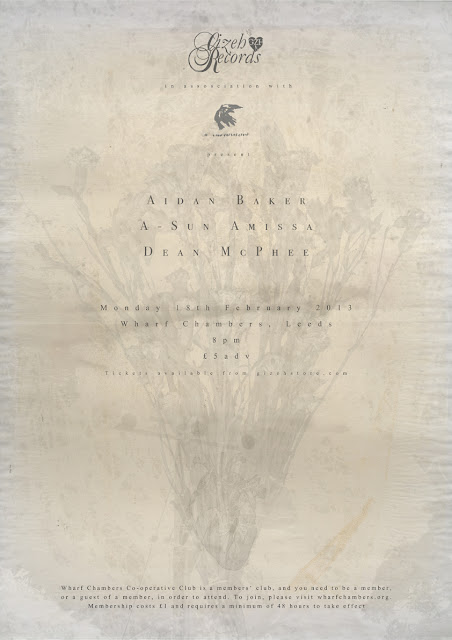 As a solo artist Aidan Baker creates music ranging from experimental/drone to ambient post-rock to contemporary classical using the electric guitar as his primary sound source. Baker has toured around the world and released numerous albums both solo and with various projects (Nadja, Whisper Room, Infinite Light Ltd.) on such labels as Alien8 Recordings, Robotic Empire, Important Records, and Beta-Lactam Ring Records.

A-Sun Amissa is a project formed out of Leeds, UK by members of Glissando and The Rustle of the Stars. Built on the foundations of the unknown, a project that encompasses minimalist drones, modern-classical movements and avant-garde tendencies. Richard Knox (Glissando / 'The Rustle of the Stars' / Of Thread & Mist) & Angela Chan (Glissando / 'The Rustle of the Stars' / Ten / Tomorrow We Sail) began forming initial ideas in the Autumn of 2011, moving away from the piano-led ambience of previous outputs. Long-time friend Owen Pegg was soon invited to join the project as the pieces developed to enable the songs the depth and intensity they require and more recently Gareth Davis joined, providing bass clarinet. The quartet produce a dense, drone-like atmosphere accompanying evocative, melodic string sections and intertwining guitars. The live show features sections of the recorded output combined with improvisation to unlock new movements and progressions in the music. The subtle, considered textures and the hypnotic interaction between players and instruments provide an intense live performance.

Dean McPhee is a Lancastrian finger-picking electric guitarist now based in West Yorkshire, whose gorgeously liquid, pure-toned playing is supremely evocative of the small splendours and grand transitions of the natural environment. His magnificent debut album proper ‘Son of the Black Peace’ has cemented the reputation won by debut EP Brown Bear.

“The hallmark of McPhee’s style is a picked bassline and free-ranging variations on melodic ideas via a mesmerising progression of harmonics, cleanly picked notes, full chords and string-bending arab-esques… Son of the Black Peace is a 37 minute gem of an album” (The Wire Magazine)