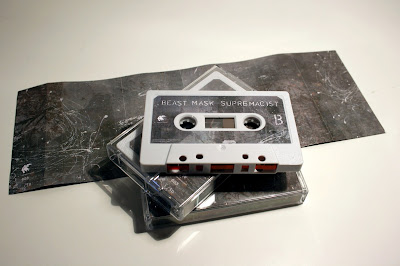 It's an absolute pleasure to be able to present you with Grey Guides' Beast Mask Supremacist, available as a limited edition cassette and digital download via the Crow Versus Crow Bandcamp.

Available as an edition of 50 cassettes, Beast Mask Supremacist is the third release from Leeds-based duo, Grey Guides, following two self-released CDRs, Back to Mucus and Songs from Grüppen Aleph-Aleph.

With Beast Mask Supremacist, the duo of Lynden St. John (vocals, tapes) and Matt Hurricane-Salt (guitar), accompanied by the presence of spiritual mediator Hogan, disseminate decrepit fragments of an abstract, non-linear narrative revolving around a cast of elusory characters perceptible only on the periphery of consciousness; Glimmers of structures emerge with a sense of uncanny familiarity from the ritualistic drone and ecstatic din, before becoming submerged once again within the complex void; Subliminal transmissions soaked in layers of whirling hiss and magnetic skree. A Burroughsian séance.

'The music staggers along bathed in hiss, echo, and garbled voices, sounding like aging tape recordings of a ritual or séance reassembled into chilling noise transmissions. This music creeps under your skin and deep into the recesses of consciousness. The titles are ace to boot, e.g. ‘Just Burned Down a Care Home’, or ‘Yoo Doo Rite’.'


'Tuned into the Fortean Times this duo’s reification cacophony of subliminal and subconscious entities – messages from the damned and inter-dimensional – is a most unnerving soundtrack. Imbued in part by early Throbbing Gristle, Blood Stereo, and of course the archdeacon of strange macabre and strung-out visions, William Burroughs, Beast Mask Supremacist is an imaginary (we hope) field recording expedition beyond the ether. Whether they got out alive remains questionable; the found remnants sounding like a battle between complete immersion and total destruction.'


'Now this well might out weird even those impish chaps the truth about frank in terms of sonic hi-jinks that messes with your head...truly an unnerving and uneasy listening experience all squirelling tape manipulations, hissing howls, white noise terrorphonics and er – primitive chanting and something which we’d have to say and admire, features among the mayhem and melee some of the finest blood lusting wolf howls we’ve heard on a platter since UK Decay’s ‘rising from the dread’. Approach with due care.'