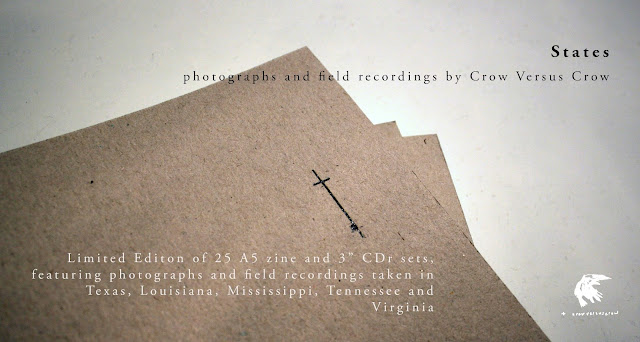 I'm very pleased to be able to present you with a new release of the Crow Versus Crow Editions imprint: States - a collection of photographs and field recordings taken by Crow Versus Crow whilst travelling through some of the southern states of North America during August 2016.

This is presented as a 48 page A5 landscape zine featuring 22 full colour photographs printed on 130gsm silk stock, with a 300gsm recycled card cover, which houses a 3" CDr featuring a single 17 minute composition of raw field recordings.
There are 25 copies available at the cost price of £5 per copy from the Crow Versus Crow Bandcamp.

A digital version, comprised of the States audio and a .pdf version of the zine, for those who prefer their wares ephemeral, is also available priced at £3.

Further contextual material for States can be found below the images.

Thank you for all of your continued support with Crow Versus Crow. It is very much appreciated.

States is not intended as an objective environmental document, rather it is a depiction of an experience of travelling through Texas, Louisiana, Mississippi, Tennessee and Virginia during August 2016, as a tourist, an outsider.

Culturally conditioned experience, a pre-conceived notion of 'America', versus the aesthetic experience of being there in the moment. Simultaneously exotic and familiar. the two overlap uncannily.

Travelling through this part of the country was, very literally, an awesome experience. Expansive, sublime landscapes ripped from the pages of a John Steinbeck novel, the romanticism sharply punctured by anti-abortion billboards and ‘Vote Trump’ bumper stickers, hinting at the incredibly complex layers of history and contemporary socio-political flux beyond, or rather within, the beatific plains.

Overwhelmed by the vastness of the land, following the traces of old Bluesmen and -women through poverty ravaged states. Industry built on exploitation erased, leaving oppressed, isolated inhabitants in it’s wake.

'..and they ran in that resonance which is the world itself
and which cannot be spoken but only praised.'