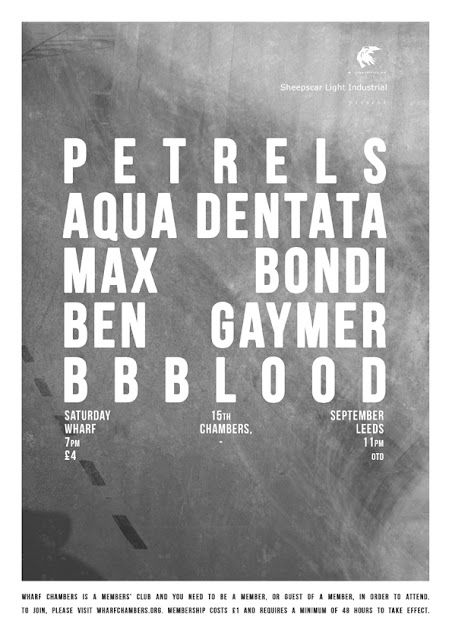 It's a pleasure to be able to work with Sheepscar Light Industrial in putting this event together. Check out their previous and continuing work here.

'...A deluge of beautiful noise and crushing melody, which ebbs and flows beneath the surface. Utilizing bowed strings, discarded electronics, found percussion and occasional vocals, portentous drone and cascading rhythm.’

Petrels is London-based musician Oliver Barrett (Bleeding Heart Narrative/Grapefruits). Debut album 'Haeligewielle' was released on Tartaruga Records in 2011 and re-issued by Denovali Records in early 2012 on CD and vinyl, combining bowed strings, discarded electronics, sporadic percussion and occasional vocals; "frighteningly claustrophobic but exultant in a beautifully understated way... monstrous arvo part-isms and peter wright destructo-drones. and with similar tropes can come across like richard skelton on steroids." (cowsarejustfood).  Petrels has played shows in the UK, Germany, France, Belgium and Denmark alongside acts such as Nadja, Trouble Books, Geoff Mullen, The Samuel Jackson Five, John Chantler, and Ronin amongst others, and 'Haeligewielle' was nominated for The Liminal's Uranus prize 2011

As Aqua Dentata, Eddie Nuttall (Baraclough) creates sounds with synths, tapes and, according to the blurb at Beartown Records, "bowed miscellany"; sounds to consume and get lost in, be they shimmering and beautiful or throbbing and fizzing...

'...An exploration of constraint, limitations, and repetition. Fragments of sound fold in upon themselves, constructing patterns and melodies which overlay, interfere and diverge, varying from dense clusters of pulsing frequencies to torrents of cascading electronic notes.

This is uncompromising machine music, but with a melodic edge, rhythmical but irregular, ‘electrical’ rather than electronic.'

Max Bondi is an electronic musician and owner/founder of Tartaruga Records.  He recently released his second album under his own name - 'Convolution' - on Tartaruga Records, which was an album of the week on Boomkat and Fluid Audio, and picked up further praise from Experimedia ('my personal favourite new listen this week. can't stop listening!'). "A totally fucking incredible record... Masterful in ways that are beyond me... A record this fucking good only comes around once in a long while" (Anti-Gravity Bunny)

Paul Watson, aka BBBlood, is a maestro of noise. Harsh noise. Wandering through his extensive back catalogue, you'll come up against some pretty intense sounds; however, there's a depth and consideration with Paul's approach that soon has you warming to them and reaping the rewards accordingly...

Ben Gaymer is the lead guitarist in Bleeding Heart Narrative and has also played with Brassica, Damo Suzuki, Grapefruits and Minus Two Quartet amongst others.  His debut album will be released on Tartaruga Records later this year. Live he creates an enveloping miasma of sound akin to Emeralds, Baths and Popol Vuh.